The Man Behind the Curtain: Amy's Choice Review

The Man Behind the Curtain:
The 11th Doctor Grabs His Archetype By the Lapels
(Subtitled: Time, Identity, Fantasy, and the Old Man, the Further Adventures of the Teacher-Doctor in the Land of Oz)

"We're in a space ship that's bigger on the inside than it is on the outside."
"With a bow-tie wearing alien."

The brilliant episode, Amy's Choice, expounds powerfully on this series' running themes of identity, time, and fantasy through the deepest investigation into the psychology of our characters that I have ever seen in a Doctor Who episode. I have already expounded on the character of the 11th Doctor in my reviews of previous episodes, and this episode truly cements my thesis that 11th Doctor is a teacher/old wise man figure in magical world of Time. Time, here is a Land the likes of Narnia, Oz, or Fantasia. And our 11th Doctor is our guide through adventure and into self actualization. In Amy's Choice, though, he takes the role of the humbug Wizard, warping reality, torturing us seemingly pointlessly, leading us on a wild goose chase, all while hiding behind the curtain.

Because the greatest moment of the show is its ending twist, let's start with the "Dream Lord", who is--in actuality--a personification of the Doctor' dark side. He first appears on the stage as a dark and warped version of the Doctor. Not only is he dressed in a dark, muted version of 11's costume, not only is his motivation a warped version of the Doctor's, but he, like the Doctor, is able to control and bend reality. Dream/Fantasy, here, is a dark version of Time. Not just a dark version of Time, but a warping of Time itself to be a location within a fairy tale. This is not new to this series. Moffat's Time of the Angels/Flesh and Bone and The Eleventh Hour were also very much fairy tales in Time. Interestingly, the two competing "realities" are actually two differing places in Time.

"We have to grow up eventually." "Says who?"

Just as importantly, these two places in Time determine identity. One is, supposedly, five years in the future, when Rory and Amy have "grown up" and become responsible adults, in a boring, safe world. Their identities have changed. The other time is the fantasy world of "now", supposedly, a child-world. We are made to believe that we are watching the "competing" worlds of Rory (the idyllic, boring town) and the Doctor (the exciting, dying TARDIS). It appears that Amy is being forced to chose between the boring, safe human Doctor Rory and the exciting, romantic Doctor. But, with the reveal that the Dream Lord is the Doctor, it is obvious that the Doctor's world is actually Amy's world. Amy, not the Doctor, is conflicting with Rory. She does not want to grow up. The Doctor, therefore, is really outside of this decision. His cruel Dark Side is manipulating the two worlds in order to help Amy make a choice.

Rory's world is the world that Time forgot. There are no more fairy tales, no more adventures. Amy, though, pregnant and yet again being associated with food, has slightly embraced this world. She is emerging as a domestic, maternal creature. The Doctor finds it a "nightmare", simply because it is so boring. The Doctor is at once an old wise man (teacher) figure, and yet, he is also a child and an alien. He is not made for the human world. The problem that threatens Rory's world is elderly aliens, a not-so-subtle reference to the Doctor himself. It is the Doctor's age that so deeply separates him from Rory and Amy. It is what makes him an alien, as well as alien to human life and human emotion. This threatens Amy: dying old and boring. All along, the Doctor is trying to help her escape this fate.

The problem that threatens the Doctor and Amy's world is the freezing cold, a beautiful symbol of the Doctor's emotional coldness that threatens Amy. The Doctor can provide her with adventure and growth (as shown in the episode itself), but he cannot provide her with the love that Rory can. Wonderfully appropriately, Amy is forced to chose the Doctor's world in order to chose Rory. This has always been obvious from her first step away from the wedding dress and into the TARDIS, only neither she nor Rory knew it. Amy needs to have her childhood, her adventure, her classroom of growth. Amy needs adventure in the TARDIS (the fairy tale in Time) in order to be with Rory. Countrawise, she needs Rory in order to have the adventure.

But, really, the most important part of the episode is the man behind the curtain, the Doctor. In conjunction with the theme of Time lies the motif of the Doctor's age. Over and over again, we are reminded of how old he is. At the end, he explains that the whole reason for the Dream Lord and the personification of his dark side was simply his extreme old age; his age, his amount of Time, his identity as an old man. The Doctor is the old/wise man figure, the teacher archetype, the guardian and guide. On the one hand, throughout the episode, the Doctor is reclaiming this role in Amy's life (and, consequently, cementing Rory's role as her lover). 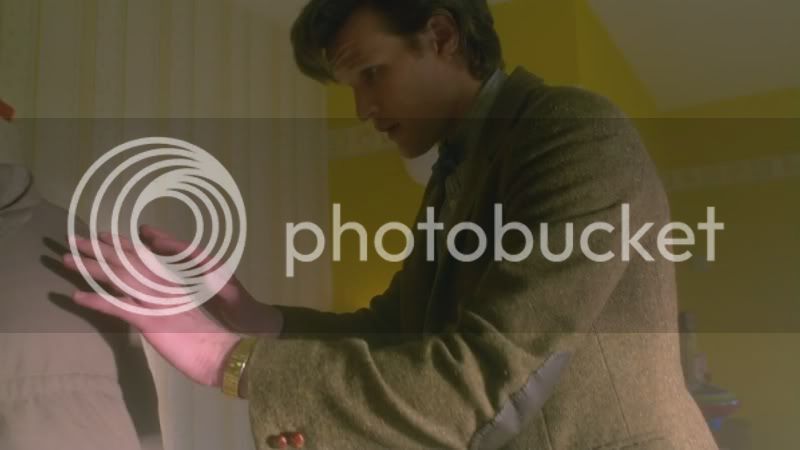 On the other hand, he reveals the very dark side of that role as a teacher/guide/old wise man. While the Time Lord is unable to address his or Amy's emotions, the Dream Lord, quite cruelly, can. By taking on this other identity (and, really, throughout this series, identity has been something of an issue), the Doctor is able to give Amy a very harsh lesson. First, he shows her his own failings. The Dream Lord is disturbingly critical of the Doctor. He picks apart all the Romantic aspects of his character. He shows Amy the holes in her relationship with him ("So, what's his name?"), and his own guilty failings in their relationship ("He always leaves you, alone in the dark."). Worst of all, the Doctor is unable to be there emotionally for Amy. The Dream Lord tries to hit on Amy, but it is an expression of how very wrong and sleazy it is for the Doctor to attempt any sort of romantic relationship with her. But, more profoundly, the Doctor reveals how inadequate he is at being there for her emotionally. There is that fantastic, heart-wrenching moment when Rory dies and the Doctor is absolutely powerless. Not only to save Rory ("Then what good are you?"), but to even simply comfort Amy (that pathetic attempt to pat her back).

"What does it matter if we're cold?"
"Why would we give up all this?" "Because we're going to freeze to death."

So, really, the two worlds are an expression of the Doctor's fears for his students more than anything else. He fears that Amy will die in the coldness of the TARDIS, that she will become so attached to a romantic ideal of him that she will never grow up. Equally, he fears that Rory is inadequate and unable to provide her with a fulfilling and exciting life.

"Only one person in the universe hates me as much as you do."

In the end, the Doctor, even with his dark Dream Lord side, has fulfilled his role as teacher, old wise man. This is a role that he has been struggling to maintain from the beginning of his relationship with Amy. Though the Time Lord is nearly incapable of dealing with the human heart (particularly 11), the Dream Lord is able to teach Amy this most important lesson. The teacher is such an outsider to the student's pain that he cannot salve it. The Doctor is so obsessed with his classroom (the TARDIS, the fantasy world), that he is unable to deal with reality. Ironically (and appropriately), it takes a complete immersion into fantasy for that resolution between the two to occur. Amy must chose the fantasy world of the TARDIS in order to save Rory (as well as her relationship with him). The real reason that the place where time forgot was such a nightmare to the Doctor was because his students, his children, were unemotional, unfulfilled, unhappy. He, though cruelly as a humbug Wizard, has saved them from this fate.

Perhaps more importantly, the Doctor is able to take on his mantel as a fairy tale creature (one that trips over the garden stones), the Peter Pan, the Mary Poppins, the Aslan, the Obi-Wan Kenobi, the fairy godmother, the Wizard of Oz, the weird, old alien pal in the bow tie, that helps the kids to grow up, and the prince and princess to hook up.